A Tree is Planted on Arbor Day 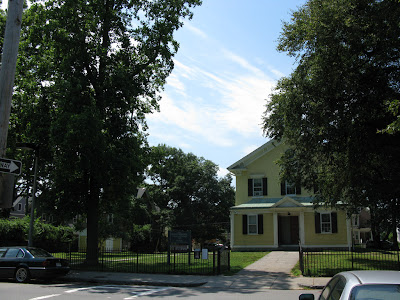 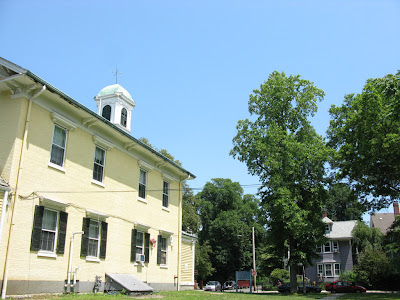 The schoolboy tulip tree, shown at its full height (photo by Charlie Rosenberg).


I considered posting this entry for Arbor Day, but there would have been no leaves on the tree in April, and it seemed a shame to show the tree without its leaves. The article below describes a tree planting by boys from the Agassiz school in 1928. Mayor Nichols lived right at the Monument at the time, and sent his boys to the Agassiz. Professor Robert H. Richards lived at the corner of Eliot and Dane streets, and was the husband of Ellen Swallow Richards, chemist and first woman granted a degree from M.I.T. The article doesn't say, but Professor Richards, then retired from M.I.T., was at the time running the Eliot School. The Arnold Arboretum got involved by donating the tree in the name of their former director. Given the roles played by three institutions, the Agassiz, the Eliot school, and the Arboretum, plus a resident mayor and his sons, plus a resident member of M.I.T.'s first graduating class, it might be nice if a small plaque could be put on the tree commemorating the Arbor Day planting. That's a lot of history for one tulip tree.


To children attending Boston schools yesterday was Arbor Day. The official observance throughout the state will be today, but schools will be closed, so appropriate exercises were held yesterday.

In Jamaica Plain, Mayor Nichols watched his two sons, Clark and Dexter, and the sixth grade boys in the mechanic arts course of the Agassiz School plant a tulip tree in memory of Charles Sprague Sargent, late director of the Arnold Arboretum. Clark is in the fifth and Dexter in the fourth grade at the Agassiz School.

The tree, a gift of the Arboretum, was planted in front of the Eliot School on Eliot st, an annex of the Agassiz, where the boys go for their carpentry and garden work. Others who attended the planting included Mrs Nichols, Prof Robert H. Richards, formerly of the Massachusetts Institute of Technology, who allowed the tree to be planted on his grounds, now rented to the city; William H. Judd, propagator of the Arboretum, who told about its work, and Joseph Q. Litchfield, master of the Agassiz School district.

The other boys who took part in the actual planting were David Shepard, David Crew, William McDonough, George Muise and James Reynolds. John Ryan read Gov Fuller's Arbor Day proclamation and John Spence was master of ceremonies. A group of eight boys recited stanzas of "Trees of the Fragrant Forest."

Thanks for Charlie Rosenberg for the photos. You can read about Ellen Swallow Richards at the Jamaica Plain Historical Society web site.
Posted by Mark B. at 10:56 PM