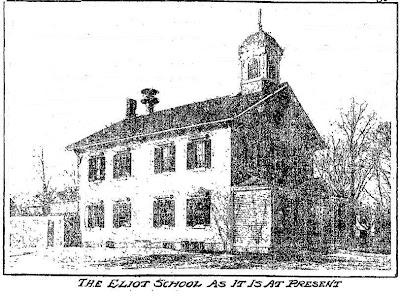 I lived a block away from the Eliot school for 10 years, and I never saw the inside of the place. My friends and I did sneak over the fence occasionally to test our ability to surmount barbed wire, and to violate private property in general. I seem to recall being chased out by a janitor or worker of some kind. We had far less trouble in the graveyard of the Unitarian church next door, so me spend much more time there.

After all these years, I had a chance to see the inside of the school recently. A craft fair gave access to the school, Eliot hall and the church, so took the opportunity to see the interior of each building for the firs time. It's hard for me to imagine that 200 students ever fit inside the Eliot school. Maybe piled up like cordwood, but certainly not in any other fashion.

The story of the founding of the Eliot school is a well known one. [Speculation warning!] When Ruggles gave the land for the first school (located at today's Soldier's Monument), I suspect that South street was not yet laid out. Why would Ruggles own the land in the middle of an intersection? More likely he owned the land where Centre street turns west, and he gave a piece at the bend in the road. Or perhaps the Ruggles land was at the fork in the road where South and Centre streets branch apart.

The story of John Eliot giving land for the support of the school is well known, but I don't think we know where that land was.


Boston Has Nation's Oldest School. Endowed in 1676, Eliot, the Apostle to the Indians, Game It 75 Acres of Land and Was One of Its Teachers.


The oldest school in the United States is situated in Jamaica Plain, according to the claim of the city authorities. To be sure, the present schoolhouse is not the one which was established in 1676, in which to teach the children of Jamaica or Pond Plain, "together with such negroes and Indians as may or shall come to said school, and to no other use, intent or purpose, under any color or pretense whatever."

The school is the Eliot School and is used now in connection with manual training under the auspices of the School Department during the day and as a private woodworking school at night.

The present building is situated on Eliot st and bears, over the second-story window, an old stone, inscribed as follows: "Eliot School, Endowed 1690."

The school, however, was really started in 1676, when 38 of the inhabitants of Jamaica, or Pond Plain, subscribed various sums, from two shillings to one pound, to be paid annually for 12 years, for the support of the school, payments to be made in corn, half English and half Indian.

The first donation for the use of "a school only" was made by John Ruggles of the triangular piece of land in front of the present Unitarian Church on which the Soldier's Monument now stands. On this site was erected the first schoolhouse. 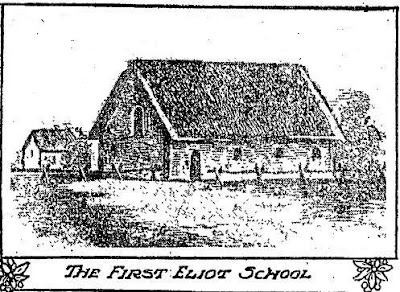 Later Hugh Thomas and Clement, his wife, offered to make over their house, orchardhouse lot and night pasture provided the town would agree to take care of and provide for them in sickness and health and during their natural lives, and to decently inter them after death. This offer was accepted and the property was put into the hands of the trustees.

On the 10th of July, 1689, the Rev John Eliot conveyed by deed about 75 acres of land to three trustees for the maintenance, support and encouragement of a school and schoolmaster at that part of said Roxbury commonly called Jamaica or Pond Plain.

The first trustees of the Eliot School were John Ward Sr. Edward Morris and John Watson. Later the number of trustees was increased and John Gore, Samuel Gore, John May, and Edward Bridge were added to the board. The trustees were chosen from the freeholders of Jamaica Plain, and "they shall be the true and sole visitors and governors of the said Eliot School in perpetual succession forever."

In 1831 the trustees erected the present brick schoolhouse on Eliot st, which would accommodate 200 pupils. The upper room was occupied by the primary school and was supported by the town. The grammar department was taught in the lower room and was in the charge of the trustees. It is still, as mentioned before, partly a private school, operated under a board of trustees, the Boston School Board using it evenings to teach manual training.

Eliot, called the Apostle, was for years a teacher and preacher to the Indians in Roxbury. He devoted two years to learning the language of the Indians from a native who had been a servant in an Engish house.

Eliot made a grammar of the Indian language, which was a laborious piece of work, inasmuch as a word of 34 letters was required to express "love" in the Indian tongue.

When Eliot entered upon this unpromising field of labor there were nearly 25 tribes of Indians within the limits of the plantations. He was opposed in his teachings by the sachems and pawwaws, or priests.

Eliot and the Indians 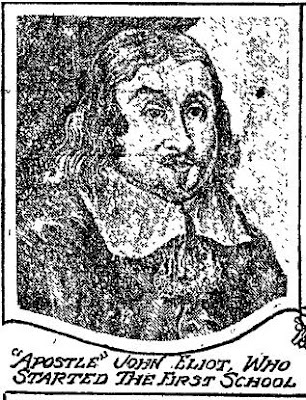 There was a great fishing place at one end of the falls of the Merrimac, where the Indians assembled in great numbers in the Spring of the year. Eliot, before the founding of the school which still bears his name, used to go down to meet them. He hired an Indian to beat down a path for him from Roxbury through the woods and to notch the trees, that he might find his way through to give lessons to the Indians.

After 12 years of labor Eliot translated the Bible into the Indian tongue. It was the first Bible printed on this continent, and remained the only one until the War of the Revolution.

Primers, grammars and other books in the Indian tongue followed the Bible, and soon there were 14 places of "praying Indians," under Eliot's care. No pains were spared by Eliot to teach the Indians to read and write and, in a short time, says Bancroft, a larger proportion of the Massachusetts Indians could do so than the inhabitants of Russia.
Posted by Mark B. at 5:29 PM